What Pairs Best with Ceviche? 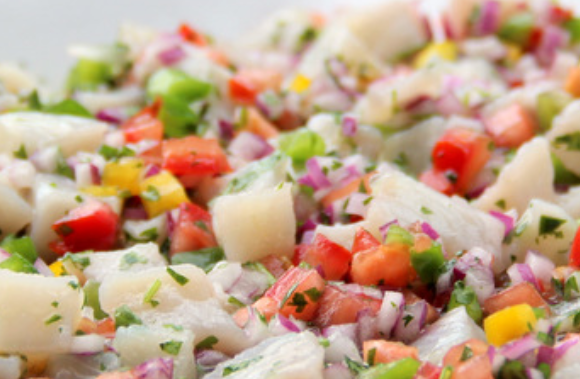 A few days back I posted a video showing off the Ceviche and white wine we were having.  I was all about the New Zealand White Haven Sauvignon Blanc. Then we got a requests for my Ceviche recipe.

So I decided to publish my first Recipe & Pairing article including the recipe for making the dish and my recommended wine that pairs with it.

My background's Cuban.  Cuban's don't do Ceviche. I didn't grow up with grandma making this for me.  I came up with the recipe experimenting.  I'm not claiming to be following a Mexican, Peruvian or Ecuadorian style.  Let's call it the Casual Winers style.  I will tell you it really good.

I came up with this recipe out of necessity.  My wife and I were on a cleanse diet and on day 5 or 6 of fish as our only protein, we were worn out.  We asked our foodie daughter and son-in-law for some suggestions and said, "Make some Ceviche."   It would have never occurred to me.  Several Google searches later and I was mixing my first batch.  It went over so well I make once or twice a month for the family.

Here's my step-by-step.  You can't mess it up.  Follow it closely and you'll have people thinking you're a South American guru Ceviche chef in no time.  That's a promise.

DISCLAIMER: Eating fresh raw fish is safe. I've been making it for years and no one's gotten sick.  Make sure to keep the fish refrigerated and make your Ceviche within a few days of bringing the fish home from the market.

Other options would be an unoaked Chardonnay, an Albariño or a dry (not sweet) Riesling.  You want to look for a light to medium bodied, dry white wine for this dish.

Get your copy of our new book.  It's a great first step for any Casual Winer.